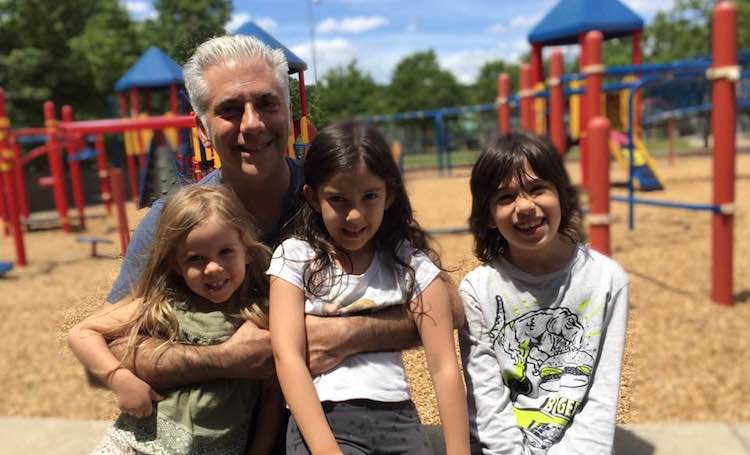 Start the online course for parents and teachers.

Rick Beato (pronounced bee-ah-toe) is a record producer based in Atlanta, Georgia. He is a father of three: Dylan (9), Lennon (6), and Layla (3). Rick used a new process called ‘high information music immersion’ with his children, two
of them started using the process in the womb. What’s unusual about Rick’s family is that his children now have perfect pitch (1 in 10,000), are multilingual, and have prodigious memories (his elder son Dylan has memorised over 500 digits of pi). But neither parent has these abilities!

Alan: Tell us about your concept of High Information Music Immersion. How did you discover it, and what got you into it in the first place?

Rick: It began out of simple curiosity of what would happen if you played complex music for a baby. Would it sound ‘normal’ to them when they were older? When my wife was 16 weeks pregnant we began playing what I call ‘high information music’ through headphones on my wife’s stomach. I would define high information music as music with great melodic, harmonic, and rhythmic complexity, usually involving all 12 tones of the chromatic scale in its melodic and harmonic structure. We began with 45-minute listening sessions each night and changed to a new playlist every 30 days. After Dylan was born, I continued to play this extremely complex music for him for 2–3 hours a day while I interacted with him.

Just before his fourth birthday I was driving in the car when I asked Dylan to sing the theme to Star Wars. When he sang it I said to him ‘I think that’s in the correct key?’. I checked with the recording, which I had on a CD in the car. Then I asked him to sing the John Williams themes to Superman and Indiana Jones, both of which he also sang in the correct keys. When we got back to our house I went to the piano and played the note B♭ for Dylan and asked him if he knew what it was. He immediately said ‘Star Wars’, which begins on a big B-flat major chord.

I then played the note G to which he instantly said ‘Superman!’, a melody that happens to start on the note G. I started to play other notes on the piano and discovered that Dylan had names for them all. It would always be the starting note of the song that he would reference. I then spent 15 minutes and taught him the names of each of the 12 notes and then he had perfect pitch. It was that simple. He actually already had perfect pitch; he just needed to know the note names.

Alan: What are the abilities you’ve seen so far?

Rick: Dylan has the ability to hear and identify chords of 16 different pitches and name them by their harmonic function as well. He can recite all squares, cubes, and factorials up to 25, the Periodic Table of Elements, the first 100 prime numbers, speak Mandarin Chinese, and recite many famous poems like The Road Not Taken by Robert Frost.

Alan: Does it extend past memorisation (and musical ability) into creativity?

Rick: Dylan is very creative in music, art and writing. He prefers to use his abilities towards his creative side rather than his analytical.

Alan: In what way is the system different to things like the popular late 90s model of Baby Einstein, or even flash cards?

Rick: The Baby Einstein model was largely based on the now debunked Mozart Effect. In a nutshell, while classical music can indeed boost cognitive function, it is a very short-term effect and most likely is the result of a sense of calm, resultant from listening to the music. Recent research shows that when babies engage in music in a social environment with significant focus on the musical quality, they show enhanced abilities to discriminate novel sounds and communicate compared with babies who only passively listen to Baby Einstein.

Alan: The Nuryl curriculum is now being used by parents around the world. What sorts of outcomes are they seeing in their children’s abilities?

Rick: The benefits of the Nuryl curriculum are not immediately noticed as the children are young, under two years old. Further, this type of immersion may not produce a single identifiable ability but rather is designed to enhance all-over cognitive function to make new learning easier and faster. Nuryl uses music as a tool to stimulate and reinforce underlying neural circuitry during a critical time of heightened brain plasticity, building a strong framework in the brain on which other learning can be built. The bigger the framework, the easier it is to add on later as new learning occurs.

We expect that children engaging in Nuryl’s curriculum will exhibit an enhanced ability to learn, integrate, and process information all around. This may be noticed as better memories, heightened ability to learn languages, mathematical prowess, and increased musical aptitude, to name a few.

Alan: What is your perspective on intelligence, and what are the possibilities for the next 10–20 years?

Rick: My hope is that early child development is explored more deeply for children in the 0–5 age range to take advantage of their increased brain plasticity or ability to learn through experience. ■

Dr Alan D. Thompson is a world expert in the fields of child prodigies, high performance, and personal development. He consults to families with special needs children including Bolshoi ballerinas, chess masters, abstract artists, and those with a mental age up to twice their chronological age. As chairman for Mensa International’s gifted families committee, Alan served two consecutive terms sharing best practice among 54 countries. Read more…

Read more about Rick’s app, Nuryl, and see stories from other children and adults:

To cite this article: Thompson, A. D. (2016). Fostering intelligence in the womb. Journal of Australian Mensa. Retrieved from: LifeArchitect.com.au/fostering-intelligence-in-the-womb/

Start the online course for parents and teachers.