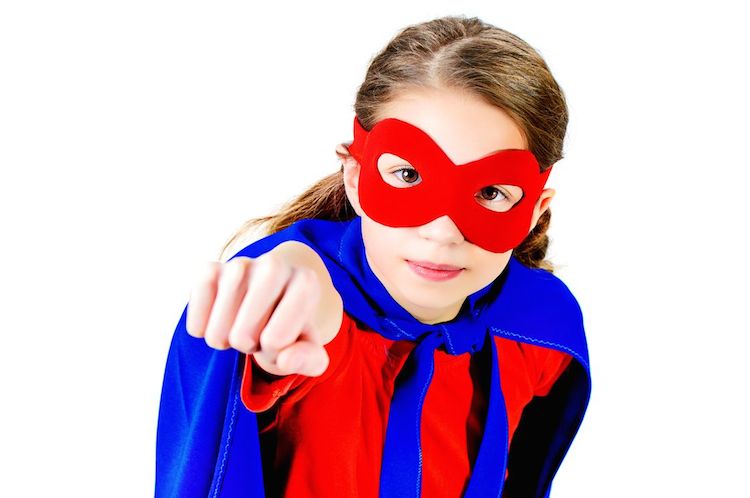 Have you ever wondered what is going on behind your child’s eyes as they stare into space? Perhaps they’re taking in the world around them, processing several different concepts at once, or joining the dots of seemingly unrelated (to us) ideas. They may even just be daydreaming—and this is as important as conscious focus!

The gifted population is the most effective (and exciting) group of individuals this planet has to offer. Their advanced brains process significantly more data than those of their peers. Their radical capabilities bring us inspiring advances such as “artificial intelligence”, architecture, inventions and symphonies.

Pick a bunch of gushing adjectives: the advanced human brain is exhilarating, exciting, and immensely powerful. Much like Superman—faster than a speeding bullet and more powerful than a locomotive—some advanced brains have access to a whole bunch of superpowers: making deep associations, sensing vividly, processing in parallel, memorising information, harnessing an extensive vocabulary, or applying combinations of these to daily life.

American husband-and-wife neurologists Brock and Fernette Eide have studied the advanced brain for decades. In their article Brains on Fire: The Multimodality of Gifted Thinkers, they comment on the physical characteristics of the advanced brain through functional brain magnetic resonance imaging (fMRI): “The first thing you notice when you look at the fMRIs of gifted groups is that it looks like a ‘brain on fire.’ Bright red blazes of high metabolic activity burst out all over the scan. Each red patch represents millions of microcombustion events in which glucose is metabolised to provide fuel for the working brain.”

Advanced brains need a lot of fuel to run! Grand master chess players can burn 7,000 calories per day playing a single game of chess. For reference, the average adult burns only around 2,000 calories a day, and that is through movement and physical exercise. The advanced brains of chess players then are creating a 350% overhead just by thinking! Stanford Professor Robert Sapolsky gave a presentation in which he explores the idea of burning these 7,000 calories per day by brain power alone: “They are sitting there silently at a table. They make no eye contact; they’re still, except every now and then one of them does nothing more taxing than lifting an arm and pushing a little piece of wood… They are going through 6,000 to 7,000 calories a day… and it’s all with thought, and memories and emotions.”

And Robert is correct, it is not just thought. Feelings and emotions are much more intense for bright children, because their broad awareness means that they are processing more data more rapidly. While your bright child processes things—all things—differently, humans are not computers. We are all emotional beings. Of the millions of pieces of data processed every second, the “feeling” part of this is what makes us human.

What is the output of these advanced and hyper-focused brains? What innate superpowers can they possess—and take for granted—that seem extraordinary to the rest of the world? While the following superpowers don’t apply to all bright children across the board (each child is, after all, unique), they give an overview of the possibilities inside each bright child. Here are just a few.

Vivid associations and sensing
One of my recent coaching clients was a gifted 8-year-old girl with diagnosed synaesthesia. Although this is not a trait of giftedness, the neurological condition is strongly linked with creativity and brightness. In this particular client, it showed up as an involuntarily link between characters (numbers and letters) and colours. She would naturally “see” colours in response to each letter of the alphabet, or number. Many creative celebrities—from Australian actor Geoffrey Rush to American singer Lady Gaga—report applying this condition to their creative output as well.

These different sensory inputs include things others may not even consider: fragrance, colour, sound, images, words… The ability to make these advanced connections is a direct result of having an advanced brain. This facility to apply multiple inputs means that bright children are able to join the dots in vastly different ways. The “always-on” nature of the advanced brain—and its application to every internal and external input—means that bright children are at a distinct advantage when it comes to the sheer amount of information available to them.

Is it really any wonder that bright children process everything differently?

Parallel processing
At 10 years old, Australian boy Chris Otway had a tested mental age of a 22-year-old, and an IQ of 200. Chris was a child with a high performing brain. Some of the superpowers that came with this brain included the ability to process tasks in the background—while his mind was resting or doing other things. In a discussion with Miraca Gross, Professor of Gifted Education at the University of NSW, Chris described his ability to “parallel process” problems. One example of this was his natural capacity to work on two complex maths problems at the same time. Miraca reported:

“He seemed to be able to sense the point at which one set of predictions/speculations/calculations (Problem 1) was nearing the point of resolution. At that time he would put that problem on hold and bring Problem 2 to the forefront of his mind, aware that his subconscious mind was simultaneously working in parallel on Problem 1. When Problem 1 had attained resolution it would explode back into his conscious mind as an “aha!” moment which would bring the keenest intellectual and emotional pleasure. The solution would remain with Chris in detail and with complete clarity while he continued to work on Problem 2.”

One of the most striking things about the gifted population is the ongoing research helping with their advancement, and the advancement of average brains as well! Chris’ ability to harness his subconscious—to “slow down” and let background processes do their job—is one that benefits a much larger population than just the top 2%.

It runs in the family too: Grace’s older sister Rose knew 63 digits of pi when she was 5 years old.

Along the same lines, Australian Mensan Daniel Kilov holds several records as a memory athlete. Mentored by fellow Australian Tansel Ali (who memorised the entire Sydney Yellow Pages in 24 days), Daniel is able to memorise huge amounts of information. From a shuffled deck of cards to 100 random digits to 115 abstract images, Daniel is able to hold vast sequences of information in his head.

Despite its unpopular reputation, rote learning and memorisation is an incredibly important facet of performance. It is a required foundation for deeper learning and understanding.

Relevant data filtering
Whether it’s grasping the intricacies of physics or the subtle beauty in music, bright children pick things up quickly. Faster than a speeding bullet, the advanced brain rapidly searches for patterns and connections, while retaining a deep understanding of useful information.

One of the reasons that this rapid processing is so efficient is because of the brain’s ability to filter out the noise from the signal. American software engineering manager Michael Lopp calls the advanced brain “an annoyingly efficient relevancy engine”. Constantly scanning its environment for data to process and things to solve, it is adept at focus—and discarding anything it deems irrelevant to the current task.

Extensive vocabulary
When he was 7 years old, Greek boy Ioannis Ikonomou had already learnt English and German on top of his native tongue. By the time he was in high school, he had added Italian, Russian, Arabic, East African Swahili, and Turkish. Now an adult, he is fluent in 32 languages including Latin and Sanskrit. He also understands that he is human: “I am not a machine. I do not speak languages perfectly. I have a Greek accent!”

One of the common items across gifted checklists is having an extensive vocabulary. Coupled with a firm grasp of language (including the use of metaphors), this superpower is visible across the spectrum of bright children.

Applied power
Bright children have access to a bunch of innate superpowers. But superpowers are only useful if they are used! All of this raw power needs to be harnessed and applied directly. Those bright individuals that have uncovered their capabilities—and recognised themselves fully—are the ones that will be able to bring their best selves to the world.

This decade, and through the 2020s, 2030s, and 2040s, the output of bright children is exploding. Looking at the creative and technological domain, 14-year-old American boy Zach Cmiel designed and developed 12 iOS games and apps currently available in the Apple Store.

At a deeper level of contribution, 11-year-old American boy Peyton Robertson connected the dots between his own talents and gaps in the outside world—especially saving lives. After flooding killed over two hundred people during Hurricane Sandy in 2012, Peyton created a new type of sandbag out of polymer. “Science is all around us. Ideas for new inventions come from my everyday life experiences. When my sisters were learning to ride a bike, I designed retractable training wheels with handle bar controls. After playing at an out-of-state golf tournament on a cold day, I designed a golf ball warmer to preserve its temperature and performance in colder environments.”

More powerful than a locomotive
Having access to these extraordinary superpowers as part of the advanced brain is exciting. Even more exciting is the huge capacity for creating, which exists in each bright child. It is becoming increasingly important to provide the most appropriate resources for these children (and adults).

Affording bright children the opportunity to apply these superpowers in an ideal growth environment enables them to flourish.

Giving them unconditional support in exploring their capabilities—and with a meaningful understanding of their own needs, values, and strengths—empowers them to believe in themselves.

Listening to them as they realise their own capacity promotes deep confidence in the way they live their lives.

Allowing them to understand the difference between memorising data and contributing to the planet encourages bright children to bring their best selves to the world.

To cite this article: Thompson, A. D. (2015). Children with superpowers: The magic of advanced brains. Retrieved from: LifeArchitect.com.au/superpowers