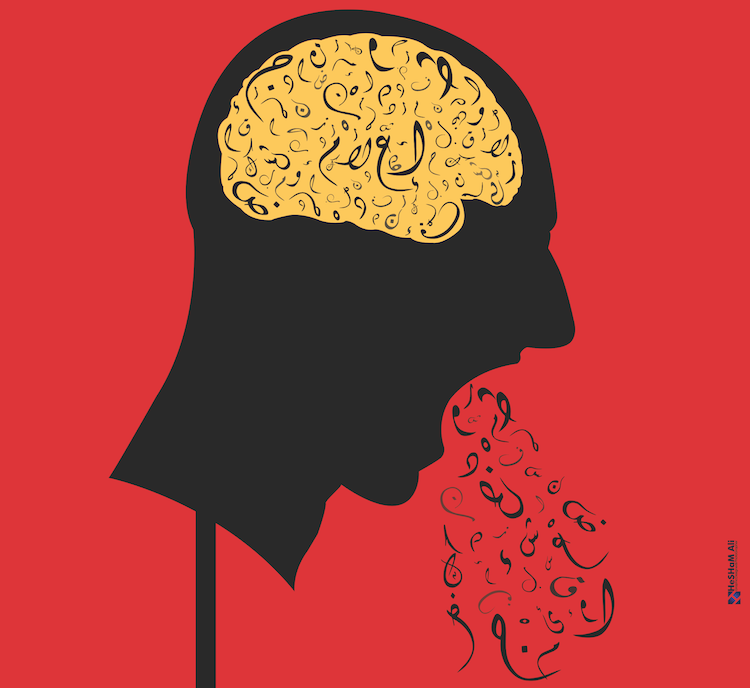 Language makes us distinct from the other animals. We need more language fast.

I recommend that everyone latch on to the idea that he or she can become a great communicator. What’s involved is awareness of tone and “dance” (going easily back and forth from speaker to listener) and being articulate, clear, appreciative, congratulatory, constructive, encouraging, friendly, and expressive.
Thomas J. Leonard, founding father of coaching

Dr Smith had a problem. He had been offered a lucrative job in the private sector, but he was nervous about telling his current university employers the news. After so many years working in research with people he liked, it was scary to have to speak with them about his decision to leave—even though it meant stepping into an exciting and stimulating future.

By not communicating with anyone about this, Dr Smith consciously avoided finding a solution. So Dr Smith’s body came up with a solution for him. Executive coach Dr Hendricks tells us more about their conversation:

The solution Dr Smith’s unconscious mind came up with was laryngitis. Prevention and protection came to the rescue… An illness with prominent, audible symptoms like laryngitis is a socially acceptable way of getting out of almost any activity. Halfway through our conversation [where he finally opened up and talked about his offer and decision], the laryngitis disappeared and his voice returned to normal.

Effective communication through expressive language is one of the most important life skills today. Gifted researchers mention that language and communication are indicators of full human development (Olszewski-Kubilius et al, 2001) and that our capacity for speech is “divine” (Peterson, 2017). It becomes even more of a vital tool for those with high ability, as they apply their capacity to the world around them. In environments where high ability is not handled optimally, it can be easy for the gifted child or adult to “play down”, especially by holding themselves back in talking. There are also diagnosable disorders including selective mutism, which is sometimes seen in bright children (Ford et al, 1998).

It is a breeze to work with confident, articulate clients—those who have felt the importance of speaking up. This can be for anything and everything, such as social injustice (standing up to bullies on behalf of others), making requests to teachers about a different way of learning, or just describing their own feelings and emotions. On the other side, there are high-ability children with a distrust of other human beings, and dysfunctional communication styles—such as the child who submitted an important response to the Department of Education in binary code, perhaps as a way of proving superiority by withholding intelligible information…

Dr Gregory Berns, a neuroscientist and professor of psychiatry at Emory University, says: “A person can have the greatest idea in the world—completely different and novel—but if that person can’t convince enough other people, it doesn’t matter.” High-ability children often have these kinds of unique ideas. And these same children can feel like they don’t need to tell or convince other people around them (especially those around them who may not have the same kind of cognitive abilities).

Find your tribe
Communication becomes far easier when speaking with like minds. It helps when the listener is attentive and interested. In particular, people feel heard when there is a deep emotional connection present: not just with parents or partners, but with coaches, teachers, friends, and others.

Just say it
Choosing to not speak up often stems from a lack of confidence. Even when it is masked as being condescending, or not feeling the need to persuade others! Genuine confidence is based on self-efficacy (“I can achieve my own goals”), optimism (“I feel positive about my life”), previous experience (“I’ve done this successfully before”), and the importance of an event (“I’m allowed to say things imperfectly here”).

Popular clinical psychologist Professor Jordan Peterson said: “Be afraid of not saying what you say, because that’s the same as not being.” Importantly, speaking off the cuff (rather than being rehearsed) is the cornerstone here. Don’t wait to be able to explain or describe fully, as the opportunity to speak passes quickly. Speak your mind without needing to feel like it’s perfect. Be excellent instead. Be human.

Coaching question: What would life be like if everyone was confident enough to speak without fear?

Get it out of your head
The disadvantages of not speaking up, of keeping thoughts and ideas internal, should be easily recognised. In extreme cases, it is a root cause of plane crashes (Gladwell, 2008). More typically, it creates an artificial environment of isolation. Reducing connection with others brings a heaviness. People are meant to share and expand and experience. Words left unspoken in the moment become an extra burden to carry. Speak up!

Being listened to and heard completely allows new solutions to open up and reveal themselves. In coaching, I encourage clients to share everything: realisations, problems, celebrations, upsets, wins, complaints, and everything else. There is beauty in sitting down and speaking your truth.

Coaching question: What would it take to allow yourself to be heard and understood?

Say it clear
For some gifted children, the quantity of speech isn’t the issue—they could talk all day! I often work with supporting these children to articulate themselves more effectively. This is usually done by using fewer words, and by distilling down the essence of what they want to say. Being able to speak clearly like this takes years of investment and practice (many adults have still not yet mastered clear speaking). This kind of conversation requires both clear message sending and clear message receiving. Taking feedback on board. Finding the core of the message. Every time.

Professor Peterson reminds us that clarity in speaking can take time. But it starts right here, and right now: “Don’t be thinking you’re alone… start talking and sharpen yourself up.”

Coaching question: What is at the core of what you want to say right now?

Over-communicate
Thomas J. Leonard, the founder of modern coaching (and a former gifted child with an IQ of 160+) introduced a tool called “over-communication”. Here, as well as just talking, both people in the exchange are constantly talking about how they are talking. For example, when engaging in conversation, both communicators could bring up concerns and feelings, or share things that are working well (and not so well) in the conversation.

This adds an overhead of time and mental processing, but it has a dramatic effect on the quality of communication, and removes disconnects or miscommunication. While adults can adopt this strategy across the board—with partners, friends, and of course children—it is up to high-ability individuals to try this for themselves.

Coaching questions: How does over-communicating feel? Who does it work best with? What makes it work well?

A positive foundation
Nurturing a positive mental state allows more lightness when communicating. That doesn’t mean negativity won’t come up, but it is not dominant, and it shouldn’t add to anxiety.

Cultivating positivity in life can be—and is—fairly simple. Start by deliberately removing as much negativity as possible. Coach and former gifted child, Ruth Ann Harnisch tells us: “I no longer allow myself to wander alone down dark alleys of thought. I don’t want to watch gory true crime or listen to sad songs or read books on subjects bound to upset me. Real life’s tough enough. Why deliberately go places where my thoughts get mugged and dragged away?”

Coaching questions: How much ease am I comfortable with—how good can I stand it? How would I feel if I spent more time speaking from my best self?

Your words create your world
The language we choose to express decides whether we are happy or sad, effective or obscured. Leonard explains: “When something leaves your vocal cords it has two to three more chances of becoming real.” Parents can assist here by integrating conversation into play, especially when the child is absorbed by their own world of fascination. This creates a strong association between excitement and communication. Our words really do create our worlds.

Coaching question: What words are you choosing to speak into life?

Creating something powerful
Communication through expressive talking is the basis of full human development, and of solid human relationships. When high-ability children can open up and verbalise their own inner workings, they give themselves a huge advantage, one that distinguishes successful and satisfied people. By developing the confidence and clarity to express themselves fully in words, they can reveal the truth about their inner worlds.

Harnisch, R. A. (2014). Everyone feels like a fraud (And other life lessons I wish I’d known). Retrieved from: https://medium.com/thelist/everyone-feels-like-a-fraud-530cfc9c774d

To cite this article: Thompson, A. D. (2017). The power of talking: Crying out for more language. Retrieved from: LifeArchitect.com.au/talking