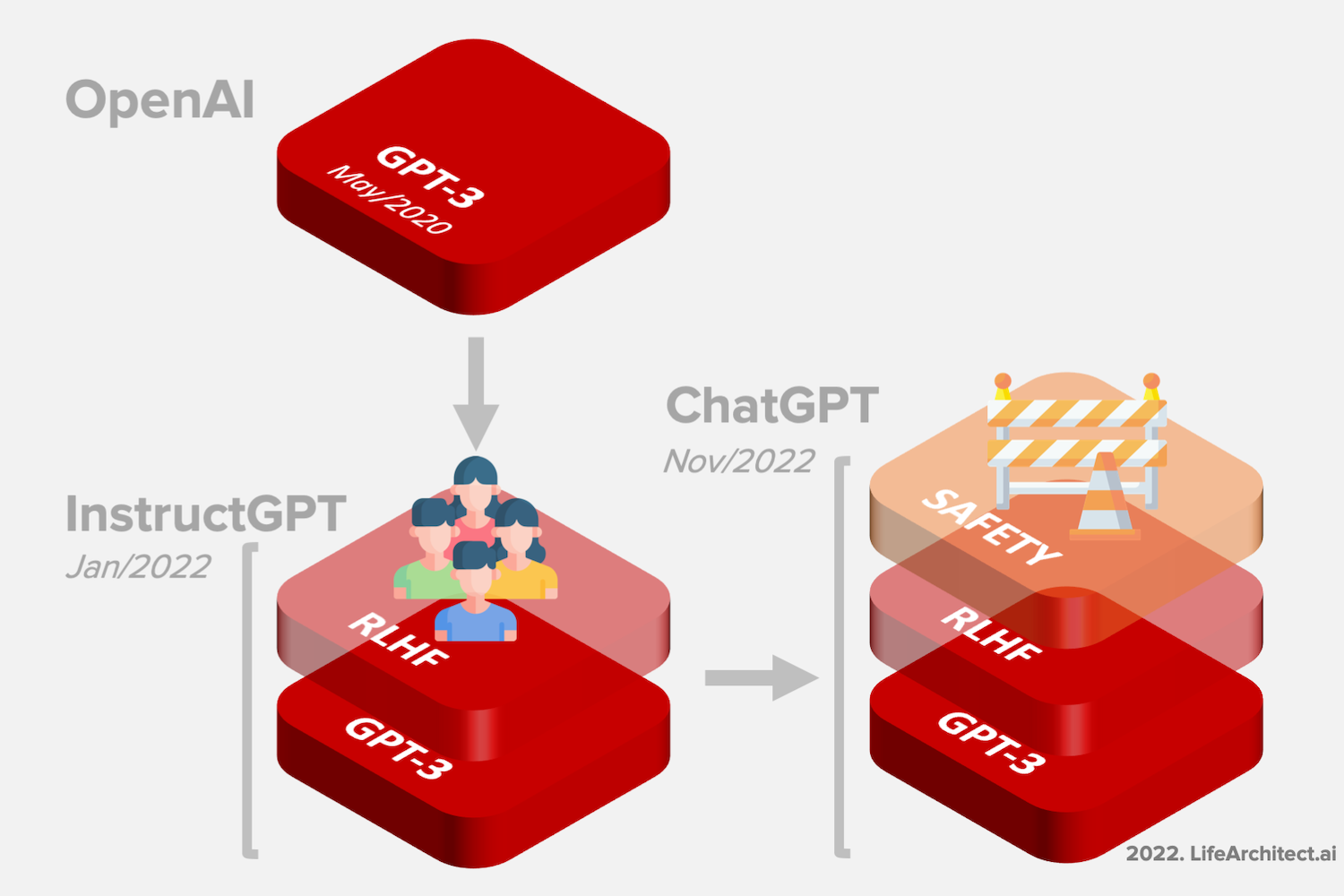 👋 Hi, I’m Alan. I advise government and enterprise on post-2020 AI like OpenAI ChatGPT and Google PaLM. You definitely want to keep up with the AI revolution in 2023. Join thousands of my paid subscribers from places like Tesla, Harvard, RAND, Microsoft AI, and Google AI.
Get The Memo.

The original May 2020 release of GPT-3 by OpenAI (founded by Elon Musk) received a lot of press coverage and public attention. Within two years, GPT-3 had amassed one million subscribed users. In December 2022, the fine-tuned version of GPT-3.5—called ‘ChatGPT’—brought in one million users within just five days1https://twitter.com/gdb/status/1599683104142430208.

OpenAI’s John Schulman2https://twitter.com/woj_zaremba/status/1599485829122252800 developed the ChatGPT platform, and its popularity has been surprising. Despite the availability of a much more powerful model in GPT-3, ChatGPT provides an intuitive interface for users to have a conversation with AI, perhaps meeting an innate human desire to communicate and connect with others.

Q: How do I get the most out of ChatGPT?
A: Check out The ChatGPT prompt book! 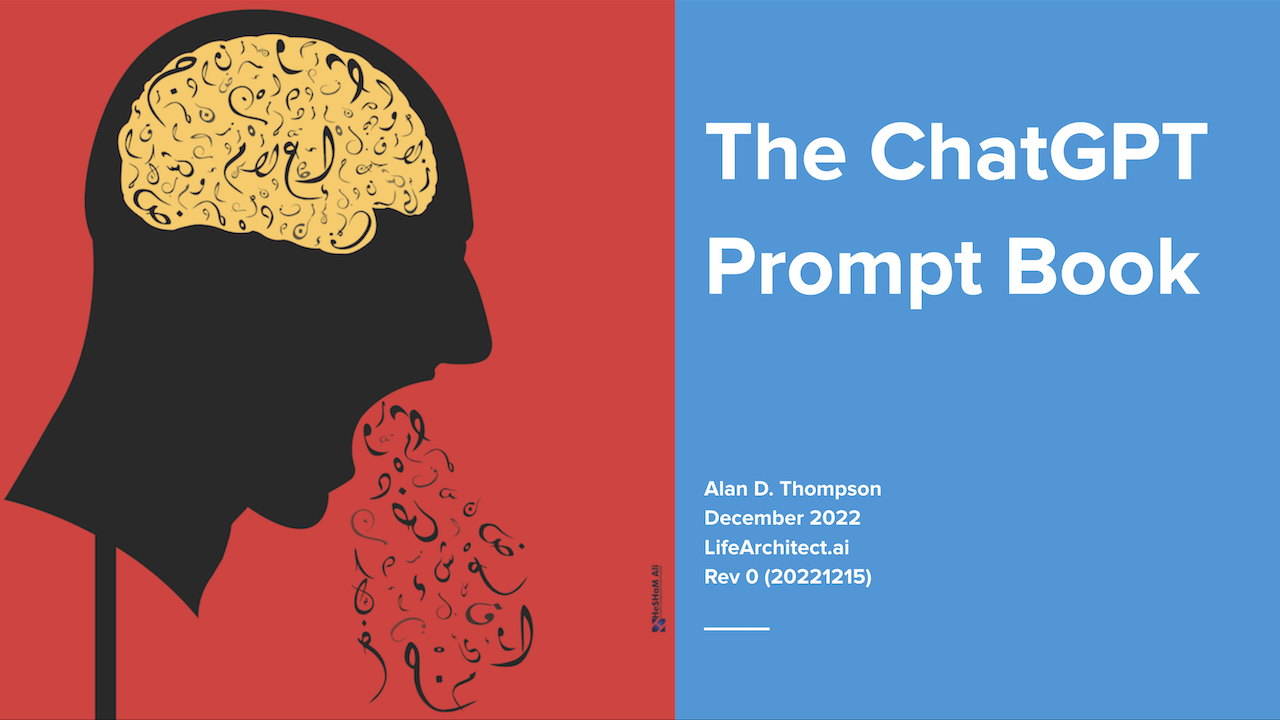 Q: How much does ChatGPT cost?
A: While ChatGPT is free, the new Professional Plan (announced around 20/Jan/2023) provides the following benefits: 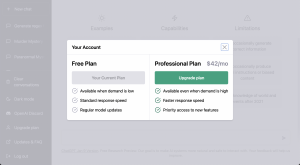 Q: How smart is ChatGPT?
A: As a former Chairman for Mensa International (gifted families), I spent many years facilitating IQ testing of gifted children and families in 54 countries around the world. I have previously estimated that GPT-3 would have an IQ of 150 (99.9th percentile). ChatGPT has a tested IQ of 147 (99.9th percentile) on a verbal-linguistic IQ test, and a similar result on the Raven’s ability test. More information is available at my IQ testing and AI page, my GPT and Raven’s page, and throughout this website. Note also that GPT-3.5 has achieved passing results for the US bar exam, CPA, & US medical licensing exam (more information via The Memo 18/Jan/2023 edition).

Q: Is ChatGPT reliable?
A: Not really. The comparable model by DeepMind had the caveat3https://arxiv.org/abs/2209.14375: ‘While we put extensive thought into our initial rule set, we emphasise that they are not comprehensive and require substantial expansion and refinement before real-world usage.‘ Likewise, OpenAI now says4(11/Dec/2022) https://twitter.com/gdb/status/1601745466613411840: ‘We believe in shipping early & often, with the hope of learning how to make a really useful and reliable AI through real-world experience and feedback. Correspondingly important to realize we’re not there yet — ChatGPT not yet ready to be relied on for anything important!‘.

Q: Is ChatGPT more powerful than GPT-3 from 2020?
A: Not really. ChatGPT is free, has a nice user interface, is more ‘safe’, and is backed by OpenAI (founded by Elon). These may be some of the reasons for ChatGPT’s popularity. Raw GPT-3 (and the new default GPT-3.5 as text-davinci-003 in the playground) is more powerful. There are many alternative dialogue models and large language models.

Q: I want to run ChatGPT locally. How do I train my own ChatGPT or GPT-3? Can you explain to me in layman’s terms how we can make this happen?
A: Absolutely! This is actually really easy to do. To get to GPT-3 175B davinci model standards (and above), you’ll need the following:

Q: Is ChatGPT copying data?
A: No, GPT is not copying data. During ~300 years of pre-training, ChatGPT has made connections between trillions of words. These connections are kept, and the original data is discarded. Please watch my related video, ‘AI for humans’ for an in-depth look at how GPT-3 is trained on data.

Q: Is ChatGPT learning from us? Is it sentient?
A: No, no language model in 2022 is sentient/aware. Neither ChatGPT nor GPT-3 would be considered sentient/aware. These models should be considered as very, very good text predictors only (like your iPhone or Android text prediction). In response to a prompt (question or query), the AI model is trained to predict the next word or symbol, and that’s it. Note also that when not responding to a prompt, the AI model is completely static, and has no thought or awareness.

Q: Where can I find ChatGPT resources?
A: This repository is comprehensive: https://github.com/saharmor/awesome-chatgpt.

Q: Where can I find out more about AI as it happens?
A: If you want to stay up-to-date with AI that matters, as it happens, in plain English, join me and thousands of paid subscribers (including those from Google AI, Tesla, Microsoft, and more) at The Memo.

Table. Timeline from GPT-1 to ChatGPT.

Summary: During around 300 years of parallel training (completed in months), GPT-3 made billions of connections between trillions of words sourced from the web. Now, it is very good at predicting the next word for anything you tell it to do.

GPT-3 was released in May/2020. At the time, the model was the largest publicly available, trained on 300 billion tokens (word fragments), with a final size of 175 billion parameters. 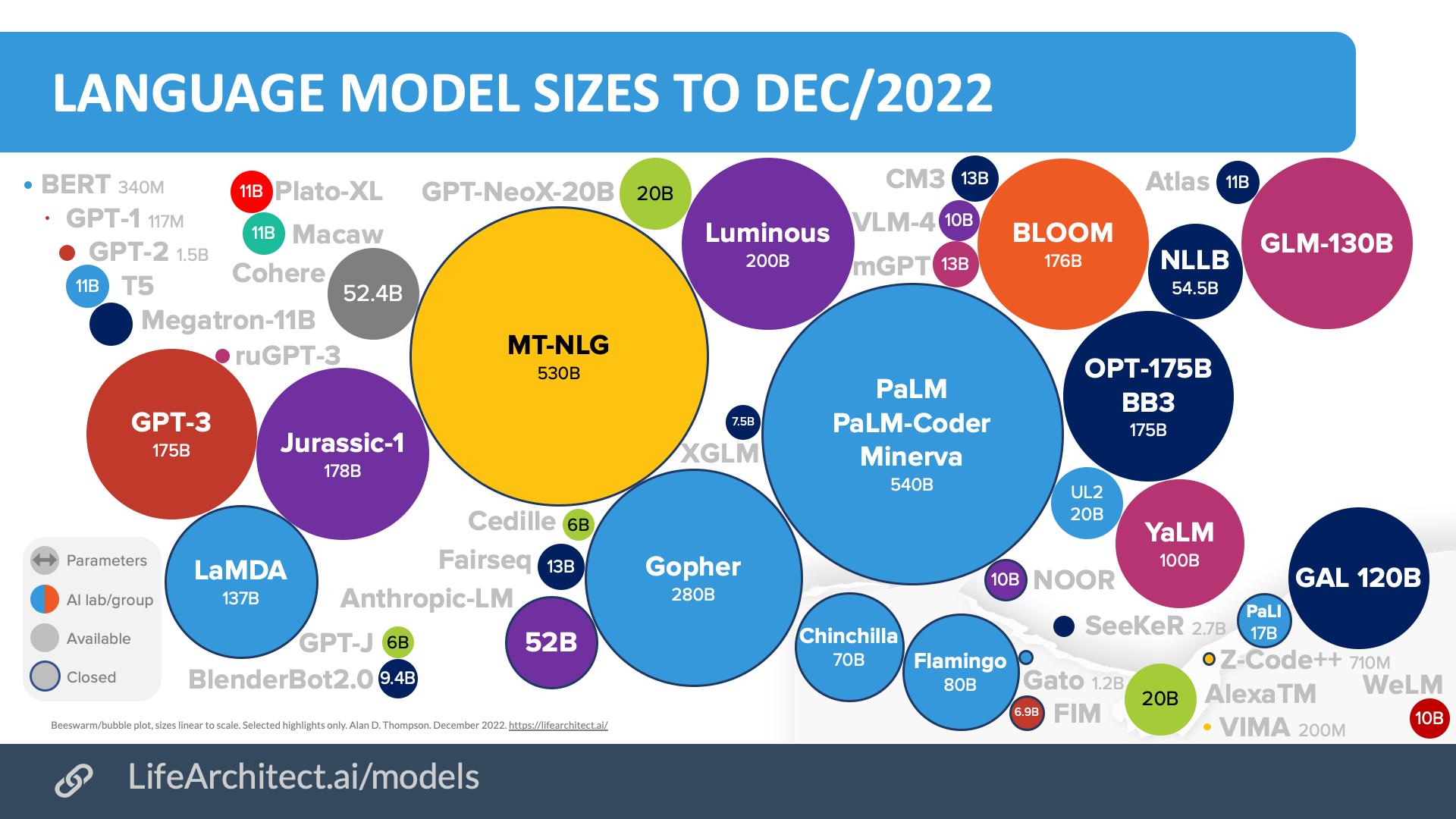 While the details of the data used to train GPT-3 has not been published, my previous paper What’s in my AI? looked at the most likely candidates, and drew together research into the Common Crawl dataset (AllenAI), the Reddit submissions dataset (OpenAI for GPT-2), and the Wikipedia dataset, to provide ‘best-guess’ sources and sizes of all datasets.

The GPT-3 dataset show in that paper is:

A more complete view of the top 50 domains used to train GPT-3 appears in Appendix A of my report, What’s in my AI?. A high-level comparison of datasets used to train a few of the most popular models appears below. 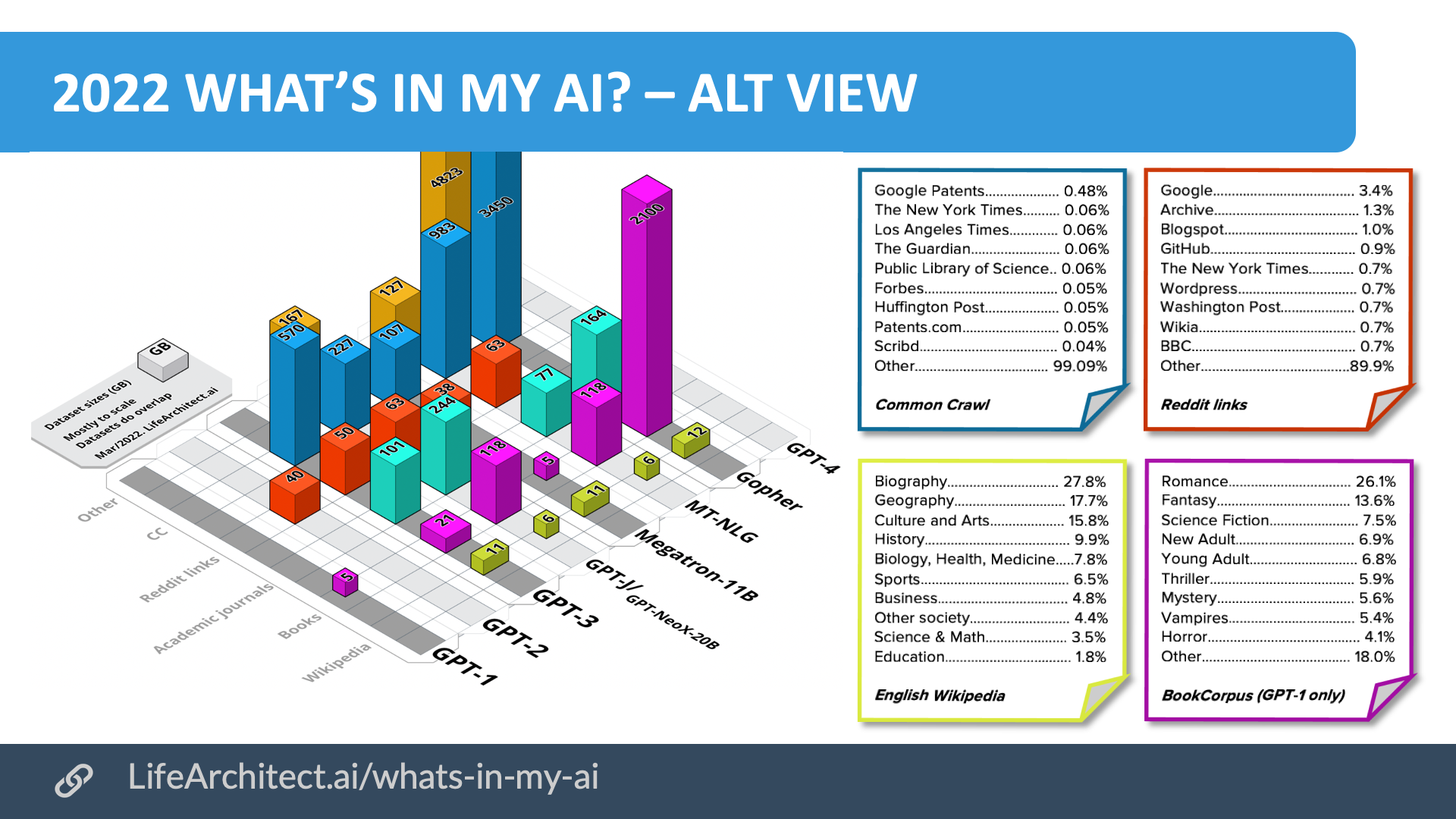 Summary: GPT-3.5 is based on GPT-3, but works within guardrails, an early prototype of AI alignment with human values by forcing it to comply with policies.

InstructGPT was released on 27 January, 2022. Using GPT-3 as its base model, GPT-3.5 models use the same pre-training datasets as GPT-3, with additional fine-tuning.

This fine-tuning stage adds a concept called ‘reinforcement learning with human feedback’ or RLHF to the GPT-3 model.

To understand more of this, let’s take a closer look at the process. 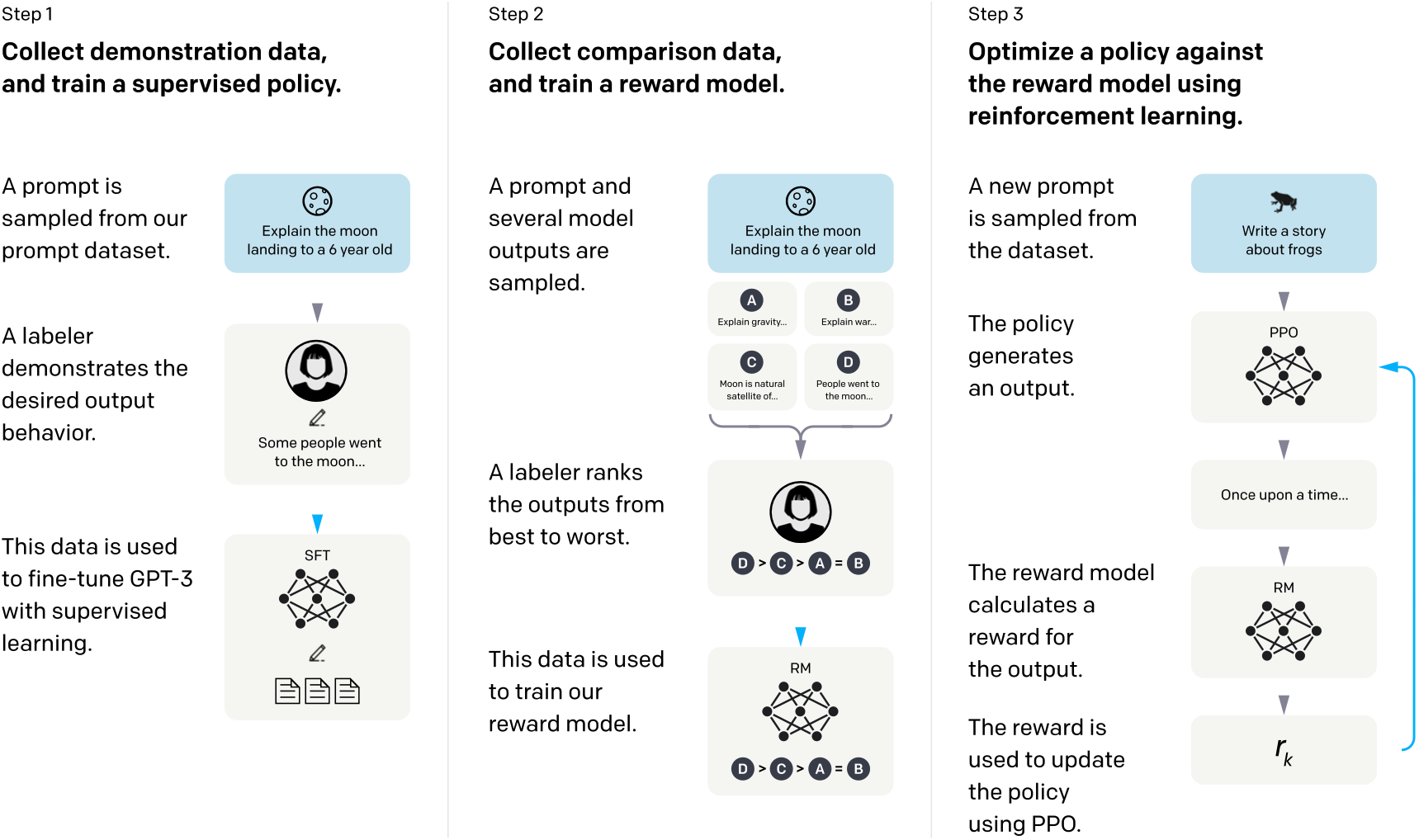 Here’s how ChatGPT explained RLHF to a user:

Imagine you have a robot named Rufus who wants to learn how to talk like a human. Rufus has a language model that helps him understand words and sentences.

First, Rufus will say something using his language model. For example, he might say “I am a robot.”

Then, a human will listen to what Rufus said and give him feedback on whether it sounded like a natural sentence a human would say. The human might say, “That’s not quite right, Rufus. Humans don’t usually say ‘I am a robot.’ They might say ‘I’m a robot’ or ‘I am a machine.'”

Rufus will take this feedback and use it to update his language model. He will try to say the sentence again, using the new information he received from the human. This time, he might say “I’m a robot.”

The human will listen again and give Rufus more feedback. This process will continue until Rufus can say sentences that sound natural to a human.

Over time, Rufus will learn how to talk like a human thanks to the feedback he receives from humans. This is how language models can be improved using RL with human feedback.

Some of the major benefits of the InstructGPT model are outlined below. 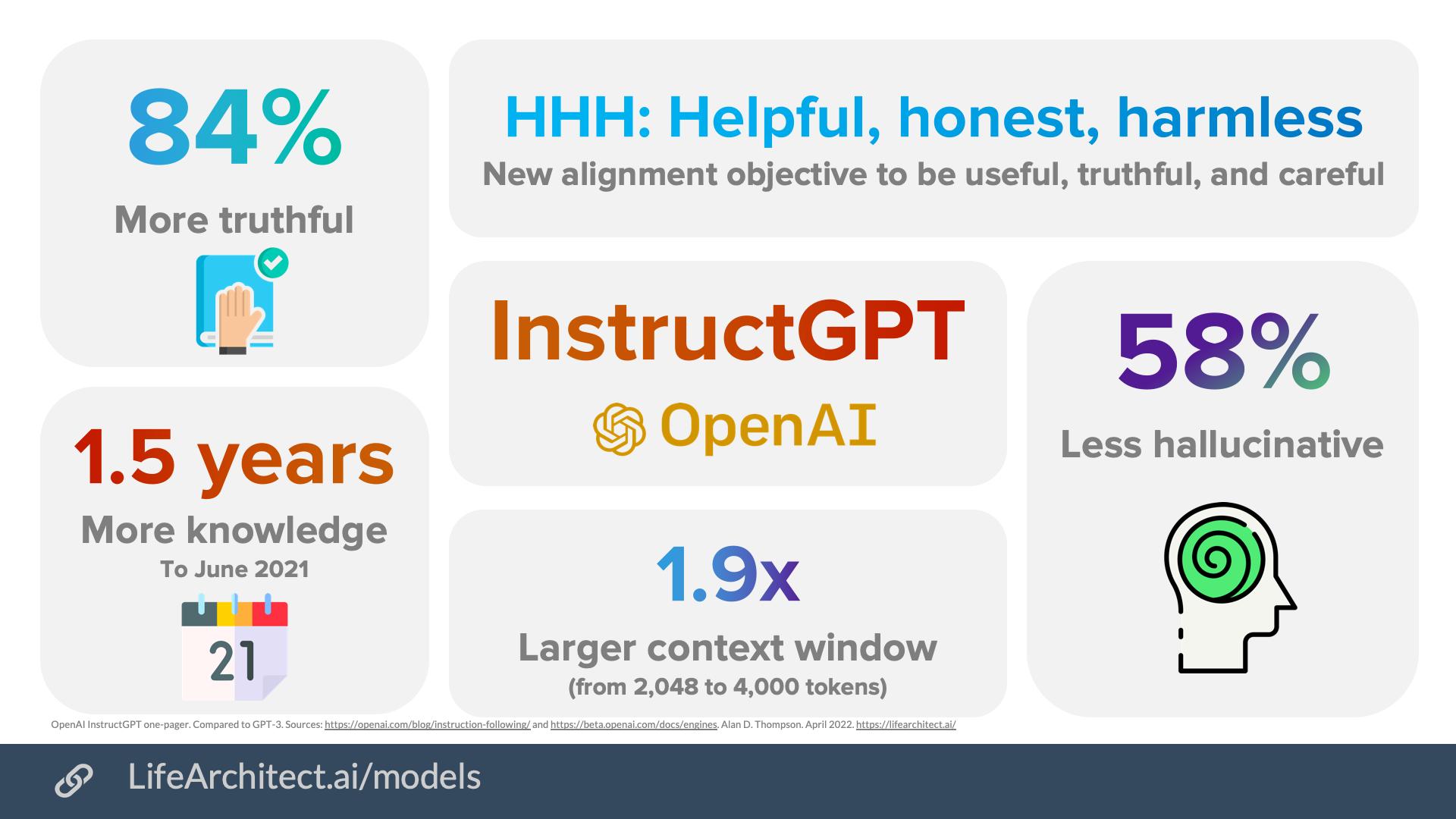 In an email, OpenAI also articulated the following benefits for the latest version of GPT-3.5, text-davinci-003.

2. It can handle more complex instructions, meaning you can get even more creative with how you make use of its capabilities now.

3. It’s better at longer form content generation, allowing you to take on tasks that would have previously been too difficult to achieve.

Summary: ChatGPT is based on GPT-3.5, but works within even stricter guardrails, an early prototype of AI alignment with human values by forcing it to comply with many rules. 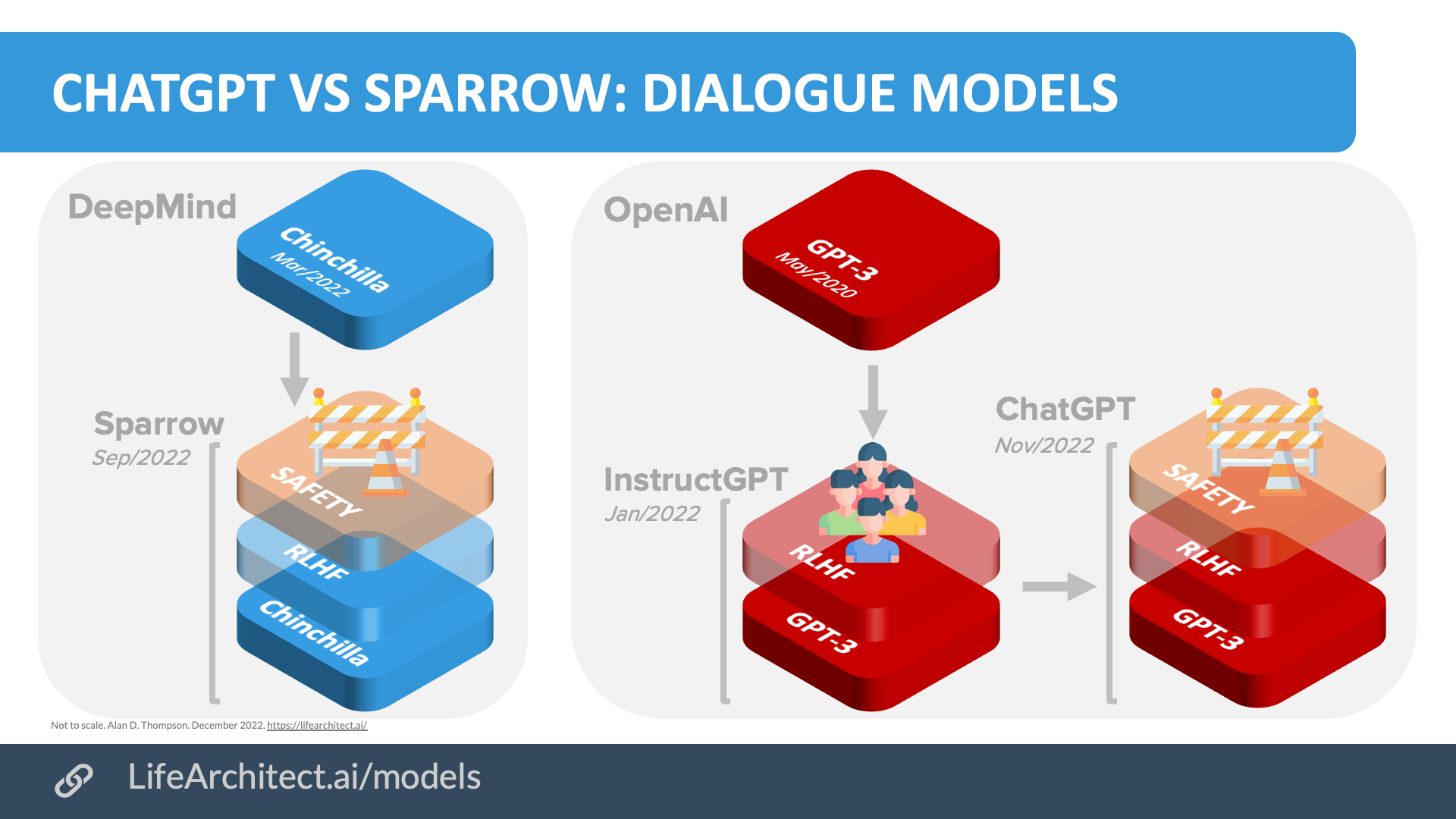 The human feedback fine-tuning concept shown above was applied following strict policies and rules. The rules chosen by OpenAI would be very similar to those applied by DeepMind for the Sparrow dialogue model (Sep/2022), which is a fine-tuned version of DeepMind’s Chinchilla model.

The rules used for DeepMind Sparrow were selected by researchers from DeepMind (Alphabet), California Institute of Technology, University of Toronto, and University College Dublin. The complete list of 23 rules applied to Sparrow appears below.

While DeepMind Sparrow also featured a detailed hand-written prompt (591 words, including many few-shot dialogue examples), it seems that OpenAI’s ChatGPT does not have a comparable prompt. Consider the following adversarial prompt test entered at the beginning of a conversation, and ChatGPT’s response:

While the functionality of ChatGPT is not brand new, the public interface—including layout, templating for code and related outputs, and general user experience—is new and innovative.

The user interface has played a key role in ChatGPT’s rapid adoption. The interface is similar in design to common messaging applications like Apple Messages, WhatsApp, and other chat software. 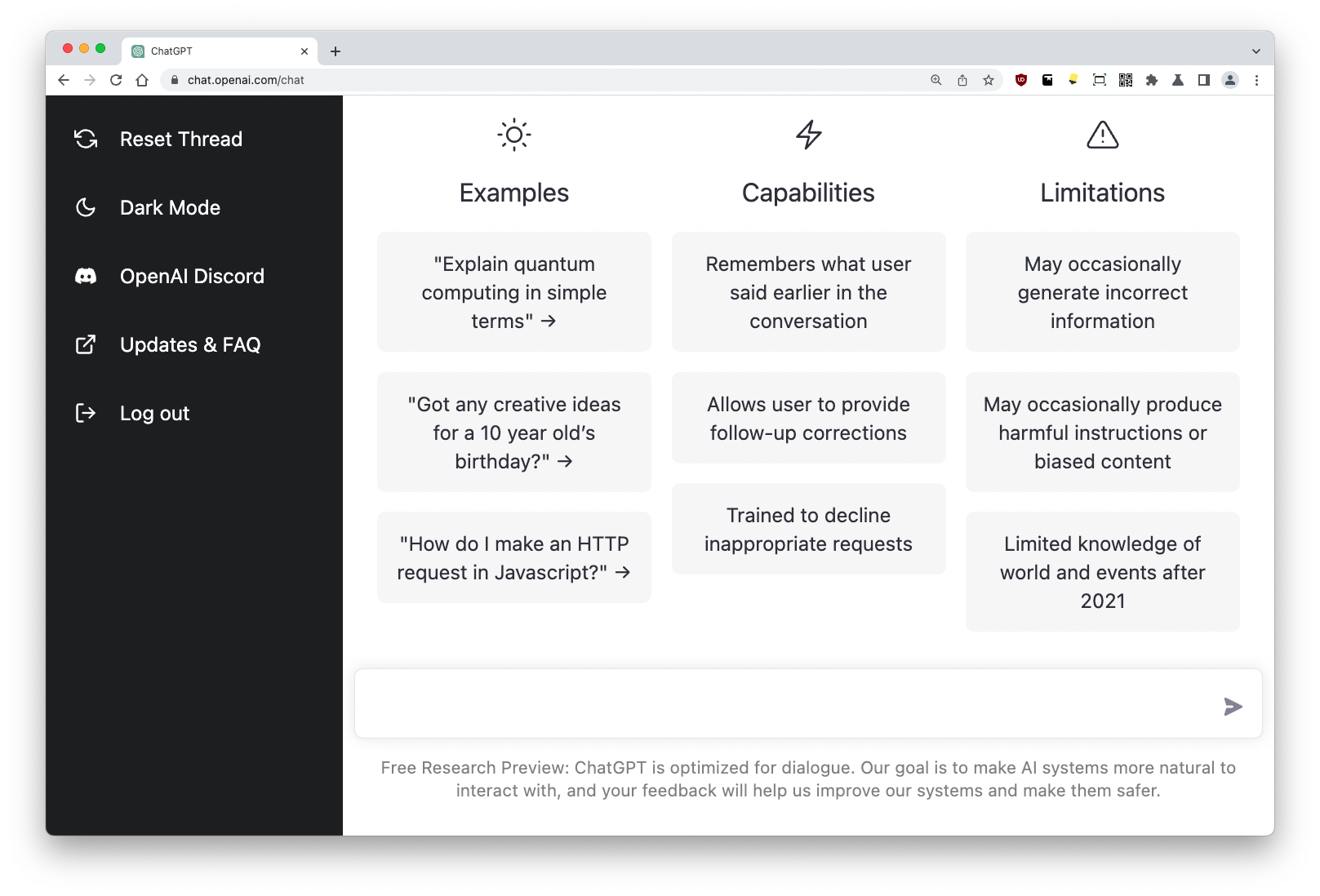