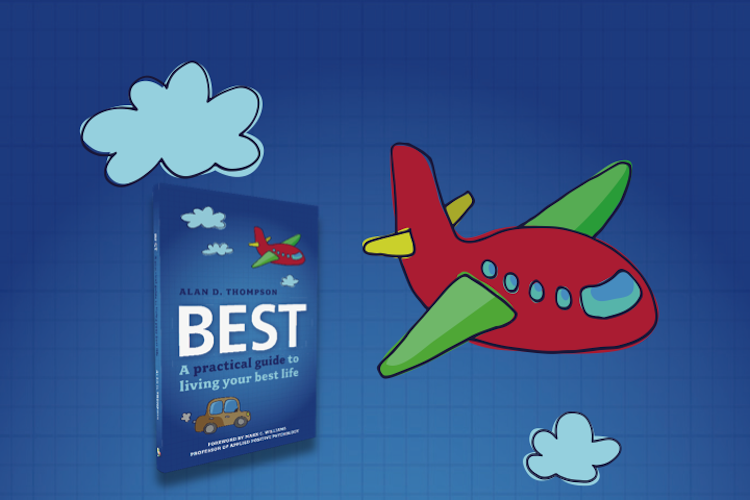 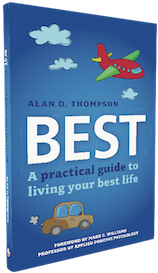 International options for eBook and paperback:

Listen to the radio interview

Being good at something is simple. Being great is easier now than ever before. But how do you go about being your absolute best? Best is an instruction manual, a help file, a list of shortcuts for living your best life.

Offering personal stories from the author’s own life, distilled wisdom from prominent teachers, and practical action to help you connect all the dots. It opens new ways of thinking about who you are, and how much more you can become.

Best’s bite-size chapters are filled with clear explanations and the occasional question, one of which is: “What would it take to stop driving in traffic, and to start flying in your own jet stream?”

To find out: sit down, fasten your seatbelt, start reading, and prepare for lift-off.

Foreword
Introduction
Magic Star
Who You Are
Why You’re Here
You Are Not a Car
You Are an Airplane
Your Environment
Focus
Choose Your Friends
You Bring Yourself With You
Courage
Risk Brings Joy
Change
Talking ‘bout My Generation
Too Much
Living or Dying
The World is Getting Better and Better
Being the Sun
Life is a Playground
Happiness
The Basics
Perfection
Connection
Integrity
Networking and Serving
Relationships
Sex and Intimacy
What is Money?
Being Patient
Job
Career
Personal Finance
Religion
Spirituality
Stress
Saving the World
Practical Experts
Email
Structure
Reality from Scratch
Reality: Picture it
Reality: Write it
Reality: Just do it
Mentors
Property
Bigger Than My Body
Adaptive Learning
Bell Curve
Food
Supplements
Water
Physicality
On Smell
Sleeping
Waking up
Massage
Meditation
Presence
Use Your Words
Success
Ego
On Transforming
Tools for Living
Writing for You
Calls.doc
Gratitude
Word of the Year
Contribution
The End is the Beginning
Acknowledgments
About the Author
Coming Soon
What Alan is up to

Read the Foreword and Sample Chapters

Striding to our table at the Barchetta beachside café, I first met Alan, looking every inch a successful, ambitious, competent, and energetic young man with a mission. I soon learned that this mission was to transform the lives of others through Life Architect coaching. A milestone on this mission is this book, Best: A practical guide to living your best life.

In these pages you can be inspired to live to your best. For some this best life is to be wise, discerning, realistic, and noble, even morally heroic; for others, to be unselfish and altruistic, and have unconditional love for others; or to be self-accepting, authentic, everything they seem to be, role models who inspire others; or to be inspired and highly creative, able to renew themselves and transform their experiences for the positive; or to be visionary pioneers, often ahead of their time, and able to see the world in an entirely new way; or to be internally stable and self-reliant, courageously championing themselves and others; or to focus their talents on worthwhile goals, becoming appreciative, joyous, and satisfied; or to be self- mastering, using their strength to improve others’ lives, becoming heroic, magnanimous, and inspiring; or to be indomitable and all-embracing, able to bring people together and heal conflicts. Whatever your strengths, you can use Alan’s message to good effect.

I wish Alan and you, dear reader, the great gift of knowing and using your strengths in the everyday ups and downs of daily life. You might even be able to decide, right now as you read, to be, think, act, and live as the strongest and happiest person you can imagine yourself to be in this very moment, and in all succeeding moments— no excuses. This book could help you on that journey.

Sample chapter: You Are Not a Car

It’s not who we are that holds us back, it’s who we think we’re not.

In 1995, ostensibly as a joke, illusionist and entertainer duo Penn & Teller created a video game for PC and Sega. The game, Desert Bus, is a real-time driving game which emulates a drive from Tucson, Arizona, to Las Vegas, Nevada. It takes about eight hours to complete the journey, travelling in a vehicle speed-limited to 70 kilometres per hour (45 miles per hour). The game is played in real time, so eight hours really takes eight hours. The game can’t be paused. There is no scenery, no passengers, and no other traffic. The vehicle constantly drifts, meaning it needs constant attention to guide it. Any lapse in attention causes the vehicle to swerve off the road and be towed back to the beginning again! Completing the entire eight-hour journey gets you one point.

The New Yorker recently called the game “The Very Worst Video Game Ever Created”. The current world record is held by a team of gamers in the US, who took turns playing for nearly six days straight, managing to score 14 points before one of the drivers fell asleep and crashed the vehicle. Defying its title and absolute uselessness to anyone, the game has a cult following and has been ported to both the iPhone and Android.

Some people actually live their lives like this game, struggling to score one point by driving meaningless and boring routes. Whether it’s through a literal morning commute, an uninspired “slave job”, or abiding by society’s rules, they deliberately and sometimes knowingly go down the path of least resistance, just to turn around and do it again for another point. Rules such as “never go over the speed limit”, “get a mortgage”, “settle down”, and “retire at 65” are designed for small thinkers.

Others have even developed a secret shortcut to getting ahead in life, through different techniques that still fit into the mould, but don’t break out of it. That slave job doesn’t seem so bad with those shares building up in the background, the mortgage is being paid off quicker than the bank says it should be, and pulling out weeds is just a necessary evil …

In the video game, players devised the same mind tricks to get around the rules. In fact, some players developed an emulator to drive the vehicle automatically, managing to obtain the top score and maximum limit of 99 points (about 33 days!). But even if people cheat, they’re still participating to get worthless points, they’re still driving a boring route, and there is still a glass ceiling beyond which they can’t go.

Ultimately, their life is still like playing the worst video game in the world!

Sample chapter: The World is Getting Better and Better

We’ve seen in the last half century an incredible shift. This is just an extraordinary time to be alive.

A few years ago, I walked into an Apple store, picked up a new laptop battery, performed the transaction while standing in the middle of the store without a cash register, had my credit card wirelessly scanned (linked to my details), had my invoice emailed to me, and I walked out. Total transaction time was less than 60 seconds.

More recently, I’ve been told that this process has been improved, so you can scan the barcode yourself with your camera phone, and walk out.

The technological advances are staggering, but I don’t think that technology is a standalone indicator of the world getting better and better.

I get excited by coaching people who take an interest in their own lives, the children and families I interact with, the clients that have been successful already and want to “level up”. These are the things that inspire me. This is proof to me personally that life is getting better and better.

Where did the word “overwhelmed” come from, in a world that allows you to do almost anything? Today, we have better education, medicine, and travel than at any other point in our history.

We are now, more than any other year in history, better, wealthier, smarter, and healthier. On our evolutionary pyramid, the bottom levels including food, water, shelter, and body are being fulfilled for more people all over the world.

Compared with 50 years ago, the average person now earns three times as much money (adjusted for inflation), eats one third more calories, and can expect to live more than one third longer.

In China alone, people are 10 times richer and live about 25 years longer than they did 50 years ago.

Populations of many species of wildlife have increased dramatically since 1900. In fact, we’ve recently re- discovered over a dozen species thought to be extinct.

Tree planting has been rising for many decades, where many forests now have actively managed plantations.

Our population is perfectly sustainable. At seven billion and growing, the rate of increase has been falling. According to an estimate from the United Nations, our population will peak at around nine billion people in 2075, and then fall. In 1994, Rod Stewart (and MTV) presented a concert at Copacabana Beach in Rio de Janeiro, Brazil. Over 3.5 million people attended. Our Earth currently only has enough people in it to do 2000 of these concerts!

Turn off the bad news. The world is getting better and better. Why? Because someone is doing something about it.

International options for eBook and paperback:

AI articles
Irrelevance of intelligence
The rising tide lifting all boats
Bonum
The sky is on fire (2021 AI retrospective)
What’s in my AI? Analysis of Datasets…