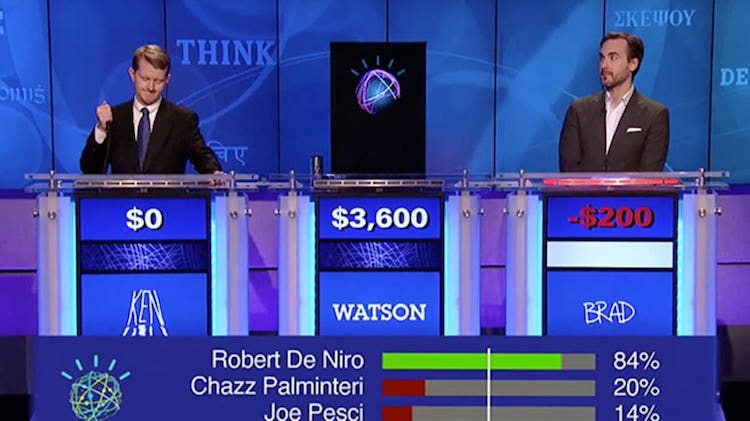 “When Watson is booted up, the 15TB of total RAM are loaded up, and thereafter the DeepQA processing is all done from memory. According to IBM Research, the actual size of the data (analyzed and indexed text, knowledge bases, etc.) used for candidate answer generation and evidence evaluation is under 1 Terabyte (TB). For performance reasons, various subsets of the data are replicated in RAM on different functional groups of cluster nodes. The entire system is self-contained, Watson is NOT going to the internet searching for answers.”
— IBM

Every time Watson boots, the 10.8TB of data is automatically loaded into Watson’s 15TB of RAM, and of that, only about 1TB is scanned for use in answering Jeopardy questions, Pearson said…

To build a body of knowledge for Watson, the researchers amassed 200 million pages of content, both structured and unstructured, across 4 terabytes of disks. It searches for matches and then uses about 6 million logic rules to determine the best answers. When given a question, the software initially analyzes it, identifying any names, dates, geographic locations or other entities. It also examines the phrase structure and the grammar of the question for hints of what the question is asking.

The details behind IBM Watson 2010

Content Acquisition
The first step in any application of DeepQA to solve a QA problem is content acquisition, or identifying and gathering the content to use for the answer and evidence sources shown in figure 6.

Content acquisition is a combination of manual and automatic steps. The first step is to analyze example questions from the problem space to produce a description of the kinds of questions that must be answered and a characterization of the application domain. Analyzing example questions is primarily a manual task, while domain analysis may be informed by automatic or statistical analyses, such as the LAT analysis shown in figure 1. Given the kinds of questions and broad domain of the Jeopardy Challenge, the sources for Watson include a wide range of encyclopedias, dictionaries, thesauri, newswire articles, literary works, and so on.

In addition to the content for the answer and evidence sources, DeepQA leverages other kinds of semistructured and structured content. Another step in the content-acquisition process is to identify and collect these resources, which include databases, taxonomies, and ontologies, such as dbPedia (dbpedia.org), WordNet (Miller 1995), and the Yago (www.mpi-inf.mpg.de/yago-naga/yago) ontology.

The Jeopardy! Watson episodes with questions and answers

Note: thanks to Stormy Shippy’s post based on research by Venkatesh Rao (Let me Watson That for You) in 2011 @ Quora (https://www.quora.com/What-questions-were-asked-in-the-Jeopardy-episode-involving-Watson)

DON’T WORRY ABOUT IT

THE ARE OT THE STEAL

Watson answers 9 correct and 2 incorrect. Note: No answers in ‘Actors who direct’ or ‘One buck or less’ categories.

ONE BUCK OR LESS

ALSO ON YOUR COMPUTER KEYS