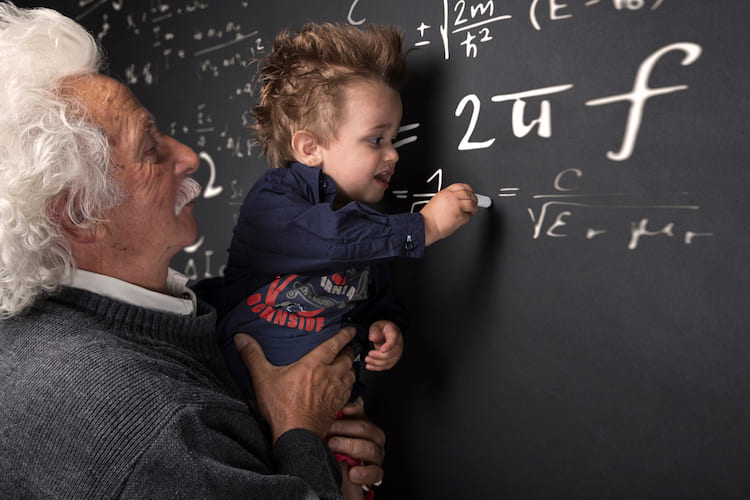 98, 99… finding the right classroom for your child
Alan D. Thompson

What does that 98th percentile (or 130 score) actually mean when it comes to your child’s IQ test report? And if psychologists don’t bother explaining it in plain English, then how can a parent or school principal be expected to interpret it?

There are two popular IQ assessment groups of instruments. The most popular group of assessment instruments used for Australian Mensa children (Thompson & King, 2015) is the Wechsler (pronounced ‘wex-lah’). This is followed by the Stanford-Binet (pronounced ‘bee-nay’) test, which is possibly more effective for testing young gifted brains.

Both modern IQ tests provide us with a normed (from a reference population: for example, Australian and New Zealand), age-relative IQ score. This score starts at about 130 for those with an IQ in the 98th percentile of the population, including all Mensa members. See the first chart above right.

The full scale IQ (FSIQ) score* can be used to derive a child’s real mental age. The formula is:

William has a mental age of 13 years and 0 months old. While modern tests no longer derive mental age—or IQ—from this simple formula, it is very useful as a conservative estimate. It can also be applied to support appropriate progression of children through classrooms, what some Australian researchers have termed ‘releasing the brakes’, rather than accelerating.

Let’s extend this calculation with highlights from the effective acceleration of two real Australians. Adelaide-born Terry Tao has a measured IQ of more than 220. Perth-raised Akshay Venkatesh has an estimated IQ of more than 160.

Acceleration is a strategy that allows a student to progress through school at a faster than usual rate and/or younger than typical age. Acceleration continues to be a necessary part of life for a high- ability child. Get the environment right and watch the child flourish rapidly. Torture them through putting them in a grade that is years below their mental age, and watch symptoms develop and manifest rapidly.

All students with an IQ at the 98th percentile or above need classwork that is at least two years beyond the work typically given to their age-mates (Assouline, 2005).

There are hundreds (Rogers, 2007) of peer-reviewed papers (and Australian Senate inquiry submissions from 1988 and 2001) documenting the significant social benefits of allowing a child to be in a classroom aligned with their mental age, unfortunately a subject in which many educators and parents remain uninformed. It is a shame that we can’t embed this information into the mandatory training for all teachers. However, given the rarity of children in this population, it is perhaps not surprising that in general, educators including school principals do not have the exposure, toolkit, or carefulness in catering to this population.

For the past few years, Life Architect has been producing advocacy reports for families around Australia. This report provides a plain English interpretation of your child’s IQ score into real mental age and grade recommendations for the following five years. It has a current acceptance success rate of 92%, and is useful for submission through the school (Department of Education),
and for families who move schools frequently through systems, like the Department of Defence.

*Note: If your child has a WISC-V report, the US-based National Association for Gifted Children has recently recommended that most subtest scores in the current WISC-V may be leveraged and used independently for calculation and in the selection process for acceleration (NAGC, 2018).

NAGC: National Association for Gifted Children. (2018). Use of the WISC-V for Gifted and Twice Exceptional Identification. Retrieved from https://www.nagc.org/sites/default/ files/Misc_PDFs/WISC-V%20Position%20 Statement%20Aug2018.pdf

Rogers, K. B. (2007). Lessons learned about educating the gifted and talented: A Synthesis of the research on educational practice. Gifted Child Quarterly, 51(4), 382-396.